Nuwara Eliya, also nicknamed Little England by the British during their occupation of the island, is a popular town in Sri Lanka’s hill country. It was known that when the British discovered the town, everything about it reminded them of England, as such they decided to name it Little England. With colonial styled, old English bungalows, the town still holds remnants of its past occupiers. Mountains of tea and hills of vegetable patches provide a variety of different landscapes for the traveller to admire. Visitors to Nuwara Eliya have a plethora of things to do here, from strolling through a botanical garden to exploring secret waterfalls in the area. Because of its mountainous terrain, the weather in Nuwara Eliya is quite different to most parts of the country. Expect cold winds during the day or night, mist, rainfall and generally chilly weather. 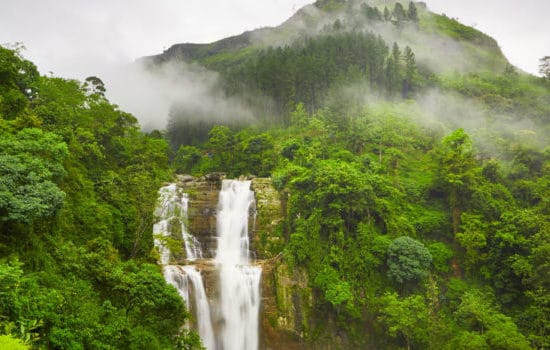 Learn the rich heritage and history of Ceylon tea as you tour around the Pedro tea factory, learning the art and process of making tea. You’ll find out the who, what, where and why of Ceylon tea!
2

Galway’s Land National Park was designated as a wildlife sanctuary in 1938 and then a national park in 2006, owing to the conservation of the montane ecosystems. The park is home to more than 20 rare migratory birds and about 30 endemic birds, making it a haven for bird lovers!
3

Manicured sprawling lawns with towering trees, colourful flowers and lush flora, Victoria Park is a bustling park for the locals and visitors of Nuwara Eliya. Enjoy a stroll through the verdant garden that’s around 25 acres. The park was so named, in order to honour Queen Victoria.
4

Hakgala Botanical Garden is the second largest and is part of the only 3 botanical gardens on the island. Set approximately 5,400 feet above sea level, the garden was first established in 1861. According to the legendary Ramayana, it was said that King Ravana offered the garden to the abducted Princess Sita for her pleasure garden.
5

Towering 30m in height, Lovers Leap waterfall is guarded by the tragic tale of a prince who was rescued by a damsel, after he got lost in the jungle. As fate would have it, the pair fell in love and were soon inseparable. However, the damsel was deemed unfit to be queen and was banished from marrying the prince. Determined to be eternally together, both of them plunged to their deaths to the bottom of the waterfall.
6

En route to the stunning city of Nuwara Eliya, you’ll come across St. Clair’s Falls, the beautiful cascade that pours over three rock outcrops into a large pool at the base. The waterfall is said to be one of the widest in Sri Lanka.
7

Also referred to as Perawella Falls, Bomburu Ella borders Nuwara Eliya and the district of Badulla. Bomburu Ella consists of about 10 smaller waterfalls grouped together. Located approximately 1500m and 2000m above sea level is believed to be one of the widest on the island. Swimming here is prohibited.
8

Another beautiful cascade on the island, Devon Falls is about 97m high, making it the 19th highest waterfall in Sri Lanka. The waterfall was named ‘Devon’ to honour the pioneers of the coffee plantation in Nuwara Eliya. Devon Falls is approximately 1,140 m above sea level and cascades over three levels.
9

En route to Nuwara Eliya, you’ll be graced with a massive hollywood-style Mackwoods lettering on the side of a tea mountain. A visit to the Mackwoods Museum will tell you the story of the tea plantation, its history and the process. Once you’re done learning the history, head over to the Tea Centre and get your tea boxes!
10

Bordered by mountains, Gregory Park snakes around the gorgeous Lake Gregory. The lake is used for watersports and landing on seaplanes. Keen travellers can jetski through the icy waters, enjoy a scenic boat ride or simply sit on the park bench admiring the stunning view before you. This reservoir was constructed under the governance of Sir William Gregory, a British governor.
11

Holy Trinity Church, an Anglican church in Nuwara Eliya was built in 1845 on the top of a hillock, a short while away from the main town. Built by the British, the church still stands today, with many of its ancient relics still preserved within its holy walls.
12

Located on the 10th highest mountain in Sri Lanka, Single Tree Hill towers to a height of 6890 feet and is approximately 2100 m above sea level, offering unhindered, and jaw-dropping sights of the surroundings! At the summit, you’ll find a single tree - which is how it got its name!
13

Take a walk back in time as you stroll through the quiet hallways of the Victoria museum. Located near Victoria Park, spend your day studying the history of tea and the land.
14

The Damro Labookellia Tea Lounge is a popular place for tea lovers to rest and indulge in a warm cup of Ceylon tea before continuing on their journey. The lounge is located approximately 5000m above sea level and is believed to be one of the oldest in the country.
15

Get back on the road and admire the scenic routes as you pass through Kothmale, Nawalapitiya, Ramboda and Pussallewa.